A rare and treasured autographed letter signed by L. M. Montgomery, the renowned Canadian author of Anne of Green Gables and Emily of New Moon, has been donated to the Modern Literature and Culture (MLC) Research Centre Collections at Ryerson University.

In 1933, nine-year-old Cynthia Downe of Calgary, with the permission of her mother, wrote a letter to L. M. Montgomery and included a poem she had composed. Cynthia had just finished reading Montgomery’s novel Emily of New Moon, a book she loved, but was told by her mother that she was too young to read the other Emily books. Not easily deterred, Cynthia wrote to Montgomery to ask the author’s opinion, and was delighted to receive in response a tiny pinkish envelope post-stamped May 26, 1933, which contained a lovely four-page letter written by Montgomery on equally pink embossed paper, a gift Cynthia cherished for decades. 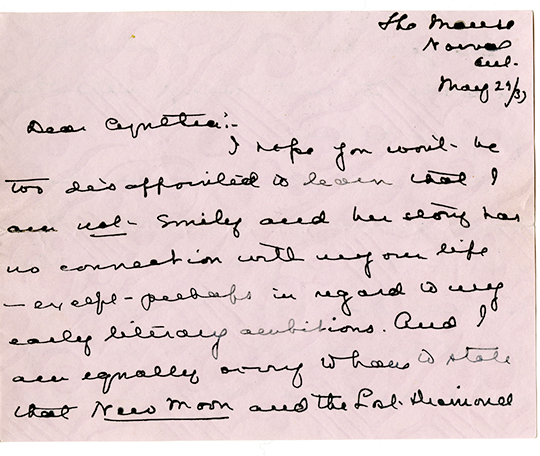 "Dear Cynthia,” the letter reads: "I hope you won’t be too disappointed to learn that I am not Emily and her story has no connection with my own life – except perhaps in regard to my early literary ambitions. And I am equally sorry to have to state that New Moon and the Lost Diamond are both wholly fictitious....”

Montgomery goes on to state her opinion regarding the sequel, Emily’s Quest: "I agree with your mother that you are not old enough yet to enjoy that book. You’ll like it better when you are older.” Montgomery also encourages the young poet: "The little verse of poetry you sent is really good for a nine year old.” The letter, which is signed L. M. Montgomery Macdonald, followed by the author’s trademark drawing of a cat, has been one of Cynthia Downe’s most prized possessions since 1933. The letter, which has just made the journey from Calgary to Toronto, will be housed in the newly renovated MLC facility at 111 Gerrard Street East at Ryerson University, where it will be safeguarded in a climate-controlled archival display. The renovations of the new wing are expected to be completed in March. 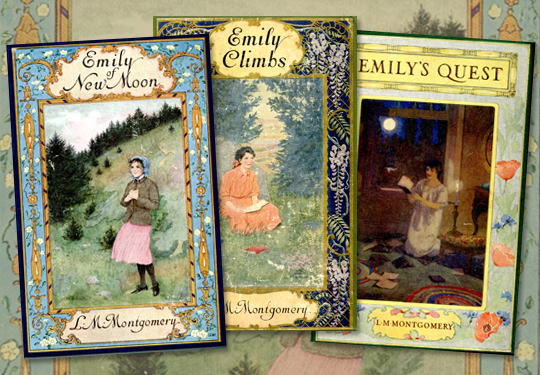 "Miss Cynthia Downe is a true kindred spirit,” says Irene Gammel, the Director of the MLC Research Centre. "She reached out to her favorite author and created a special connection that she is now passing on to others to treasure and enjoy. We will cherish this gift for many years to come. We also look forward to celebrating Cynthia’s gift of friendship and creativity which is embodied in this letter.”

"I am so very pleased the letter will be cared for,” says Cynthia Downe, a retired music teacher and teacher consultant, who is still living in Calgary in the home she knew as a child. Still cherishing L. M. Montgomery’s books, she notes that she has been lucky to have met many "kindred spirits” during her life.

L. M. Montgomery herself cultivated special relationships with her fans, as she writes in an article published in Echoes in 1922: "I have always been glad that there is something in human nature which makes us feel when we have read a book that we want to tell the author what we think of it. If it were not for this, my ‘literary career’ would have been minus much real pleasure and not a little amusement.” Montgomery continues: "Ever since the publication of my first book, I have received a continuous stream of letters from all over the world. The great majority of readers and girlish outpourings of pleasure from the sweet ‘teens.’” As Montgomery notes in her letter to Cynthia, "I get hundreds of letters every month from my readers and leading a busy minister’s life I can answer them all only by a note.”

The letters are life-long mementoes for the fans lucky enough to receive them, and by extension for the collection receiving the gift. 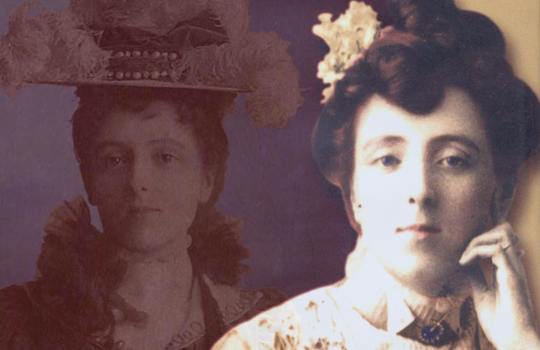 Born in Calgary in 1924, Cynthia Downe holds a Master’s degree in music education. She studied at the University of Calgary and the University of Oregon as well as spending a year of study in Germany. She received an Excellence Award from the Provincial Government for her work in writing curriculum for teachers in Alberta.