A review of Body Sweats: The Uncensored Writings by Elsa von Freytag-Loringhoven by the formidable Vanessa Place in The Constant Critic: Timely Poetry Reviews.

There once was a time when poets all came capitalized, when only to write was proof insufficient of one’s aesthetic veritas, when animas was real gravitas, when one had to, like the field primordial, fairly ooze with self-generation. That time, my piglets, is today. Alongside the sterile clucks over the crowd-sourced, and the batten on the autre donnèe, there is a cry for poet-authenticity like nobody’s business. And in the mirrored halls of SOULS NOT! FOR! SALE!, there is no portrait that hangs so heavy as the one that wears the crown: 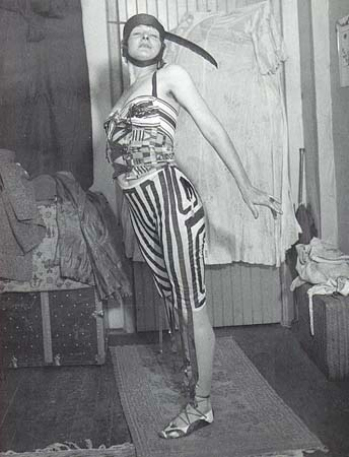 She was queen of Dada, siren of the Surreal. She made Pound look merely Poundian, Barnes slightly soppy, and Duchamp, a thin man prone to bon mots. Graced and afflicted in equal measure with some à la mode of major order disorder, the Baroness (as the editors of Body Sweats and I, and now you, think of her) lived life sehr large as matter of course, by way of largesse. Lover of Duchamp ("The Baroness is not a futurist. She is the future.”); subject of Pound ("the Baroness” / von Freytag etc. sd/several true things / in the old days, "Canto 95”), compatriot of Barnes ("a citizen of terror, a contemporary without a country”), pet of Heap ("The Baroness is the first American Dada.”), the Baroness was a work, never in, but of progress. Denizen of New York (v. downtown, unclear how she got there) by way of Kentucky (stranded by lover after helping him fake his suicide) by way of Dachau/Munich (architect 2nd husband) by way of Berlin (artists’ model), Baroness by way of marriage to a real royal who had the grace to have himself quickly killed in the first aerial War. The prepositional suits her, as it often, in usage, presages "much,” and the Baroness was of much as much as she was of anything at all. As is often the case, her irreverence was reverence itself: to the Baroness, Marcel was "M’ars” (say it and think Brit), and she wrote a poem about his orgasms ("Aphrodite to Mars”), and William Carlos Williams "W.C.” (res ipsa), and she did not similarly salute him. She scavenged readymades off the street, including a 1917 sculpture from a twist of plumbing pipe mounted on a miter box, that she titled God. i As a 1910 New York Times headline proclaimed of the Baroness, post-arrest in Philadelphia: "She Wore Men’s Clothes.” When, the lady could have asided, she bothered to wear anything at all.