A review for Body Sweats: The Uncensored Writings of Elsa von Freytag-Loringhoven appears in the January issue of Cercles, an English-language online journal, based in France covering the literature and culture of English-speaking countries. 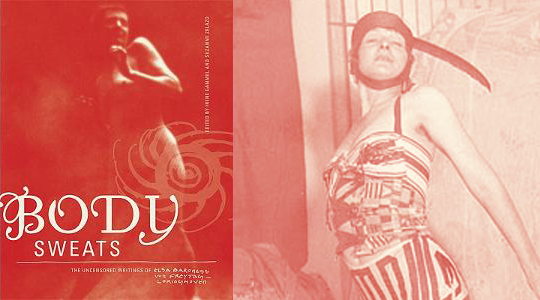 The publication of Body Sweats : The Uncensored Writings of Elsa von Freytag-Loringhoven is a landmark event for readers of poetry and scholars of Modernism for at least three reasons. Most basically, this book makes available for the first time the full range of Freytag-Loringhoven’s verse, allowing readers the opportunity to experience this remarkably innovative body of writing, with its striking imagery and startling sonic play. At the same time, Body Sweats makes a major contribution to the ongoing re-evaluation of the Modernist canon, forcing readers to enlarge their conception of avant-garde writing in New York (and elsewhere) in order to accommodate Freytag-Loringhoven’s achievements. Finally, Irene Gammel and Suzanne Zelazo’s editorial work foregrounds questions that are of interest to all those scholars who are currently working to make available the vast quantities of unpublished or little-circulated documents relating to the Modernist period.

By the time she settled in New York City in 1913, Elsa von Freytag-Loringhoven had already led an eventful and unconventional life. Born Else Hildegard Plötz in Germany in 1874, she was thrice-married (to the architect August Endell in 1901, to Endell’s friend, the translator and poet Felix Paul Greve in 1907, and to Baron Leopold von Freytag-Loringhoven in 1913). With Greve she traveled widely in Europe and migrated to North America, stopping in smaller cities like Cincinnati (where she began to work as a model) and Pittsburgh (where she was arrested for wearing male clothing in public), as well as rural settings like Sparta, Kentucky (where she and Greve operated a horse farm). With Baron Leopold she took up residency in New York, where she stayed for the ten years that followed – a period in which she composed most of the verse published in Body Sweats. And from her marriage to him she took the title of ‘Baroness’, by which she would be best known for the rest of her life.