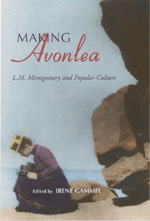 Irene Gammel’s Making Avonlea makes a sophisticated contribution to the growing understanding of Montgomery’s influence around the world. Carried on the wings of narrative, popular culture becomes the basis of a shared community which—in Montgomery’s case—has travelled around the world and now moved into cyberspace...
— Mary Rubio, Coeditor of The Selected Journals of L.M. Montgomery

Since the publication of Anne of Green Gables in 1908, L.M. Montgomery and the world of Anne have propelled themselves into a global cultural phenomenon, popular not only in Canada, but in places as diverse as Japan, the United States, and Iran. Making Avonlea, the first study to focus on Montgomery and her characters as popular cultural icons, brings together 23 scholars from around the world to examine Montgomery's work, its place in our imagination, and more specifically its myriad spin-offs including musicals, films, television series, t-shirts, dolls, and a tourist industry.

Invoking theories of popular culture, film, literature, drama, and tourism, the essayists probe the emotional attachment and loyalty of many generations of mostly female readers to Montgomery's books while similarly scrutinizing the fierce controversies that surround these books and their author's legacy in Canada. 25 illustrations of theatre and film stills, artwork, and popular cultural artefacts, as well as snapshot pieces featuring personal reflections on Montgomery's novels, are interwoven with scholarly essays to provide a complete picture of the Montgomery cultural phenomenon. Mythopoetics, erotic romance, and visual imagination are subjects of discussion, as is the commercial success of various television series and movies, musicals, and plays based on the Anne books. Scholars are equally concerned with the challenges and disputes that surround the translation of Montgomery's work from print to screen as well as the growth of tourist sites and websites that have themselves moved Avonlea into new cultural landscapes. Making Avonlea allows the reader to travel to these sites and to consider Canada's most enduring literary figure and celebrity author in light of their status as international icons almost one hundred years after they first arrived on the scene.

Making Avonlea is an impressive book … The significance and importance of its attempt to trace the impact of Anne of Green Gables on popular culture can neither be underestimated nor minimized, and its scope - from novel, to film, to television, to theatre - is extraordinary. The project Gammel has undertaken is ambitious, and the book lives up to its promise … [It] is a text that will appeal to general readers, cultural studies critics, women's studies specialists, Canadian literature scholars, theorists of popular culture, among many others. Its potential audience is large, and its subject matter provocative, timely, and compelling.
— Priscilla Walton, Department of English, Carleton University

Against all odds, Lucy Maud Montgomery has become the prototypical pop-cult figure of 20th century literature. Nearly 100 years after writing Anne of Green Gables, she brings together the high-brow and the low, the academic and the fan, the virtual and the merely fictional... Making Avonlea: L.M. Montgomery and Popular Culture, edited by Irene Gammel, includes topics from the significance of tuberculosis in Montgomery’s stories to the way the novels’ cover illustrations have reflected attitudes toward women and girls across different eras and cultures.
— Cynthia Browse, Saturday Night

A book about the popular industry that has sprung up around the name of L. M. Montgomery is certainly a book whose time has come. Irene Gammel’s collection of essays Making Avonlea: L. M. Montgomery and Popular Culture is an important addition [and] the first book to reflect on the spin-off industries (e.g. films, tourism, merchandise)... As this stellar anthology effectively proves, Montgomery has a lot to teach us about popular culture in all its manifestations.
— Patsy Kotsopoulos, Canadian Children’s Literature

Making Avonlea: L.M. Montgomery and Popular Culture does an excellent job of documenting the range of activities and artifacts generated by Montgomery and her writings. It covers both academic and popular, theoretical, and concrete elements of the Montgomery phenomenon and provides a fascinating read about the ways in which people have engaged and continue to engage with the writings, characters, and values of L. M. Montgomery and her creations.
— Teya Rosenberg, Canadian Children’s Literature Quarterly

Has Anne of Green Gables had a strong impact on popular culture? The author [of Making Avonlea] makes a case that its impact cannot be underestimated or ignored. From novel, to film, to television, to theater, Montgomery’s work has influenced not only Canada and North America, but has reached as far as Japan and Iran.
— Feminist Academic Press Column

Following on the heels of the 1999 study of L.M. Montgomery and Canadian Culture, which looked at Montgomery’s impact on Canadian culture, Irene Gammel’s Making Avonlea makes a sophisticated contribution to the growing understanding of Montgomery’s influence around the world. Carried on the wings of narrative, popular culture becomes the basis of a shared community which—in Montgomery’s case—has travelled around the world and now moved into cyberspace... Making Avonlea: L. M. Montgomery and Popular Culture is a significant and unique Canadian contribution to the growing body of international work on popular culture.
— Mary Rubio, Coeditor of The Selected Journals of L.M. Montgomery

This webinar explores the importance of artistic expression, critique, and resistance during a time of pandemic.

This webinar explores this unprecedented educational disruption with the help of university leaders from across the country.