Reviewed by Irene Gammel, as published in the Globe and Mail, March 25, 2011

Few state-sanctioned killings seem as chillingly prescient as the execution of Jewish activist Rosa Luxemburg in Weimar Berlin. On the evening of Jan. 15, 1919, the 47-year-old Polish-born revolutionary was assassinated by a group of proto-fascist paramilitary men. Luxemburg, one of the greatest minds of the German socialist movement, was struck in the face with the butt of a rifle, dragged inside a car and shot in the head, her body discarded in the River Spree. That same night, her comrade, Karl Liebknecht, was killed near the Zoological Park in a similarly cold-blooded execution. The brazen brutality of these assassinations symbolized the doom of Germany’s young democracy. 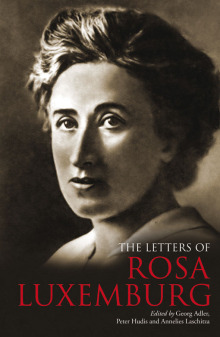 Providing fascinating insight into Luxemburg’s courageous and unconventional life (which included several incarcerations), The Letters of Rosa Luxemburg covers her correspondence from 1891 to 1919, the last letter composed just days before her death. Her fierce criticism of the excesses of capitalism earned her the monikers “Red Rosa” and “Bloody Rosa.”

The three decades covered by the 230 letters in this collection provide the context for her major contributions as a political activist, feminist and writer. In her controversial tome of 1913, The Accumulation of Capital, as well as through her work as a co-founder of the radical Spartacus League, Luxemburg helped to shape Germany’s young democracy by advancing an international, rather than a nationalist, outlook. This farsightedness partly explains her remarkable popularity as a socialist icon and its continued resonance in movies, novels and memorials dedicated to her life and oeuvre.

Providing plenty of episodes that lend themselves to cinematic heroism, the letters of this physically petite yet mighty revolutionary testify to her bravery and defiance. Describing to her close friend and famous feminist Clara Zetkin her spontaneous reaction to the early-morning arrest of Liebknecht, Luxemburg recalls: “At 8:30 am, [when he was arrested in Potsdamer Platz], I tried with all the might of my fists to ‘free’ him and I pulled at him and at the policemen all the way to the police station, from which I was unceremoniously expelled.”

For Rosa, the revolution was a way of life, as she articulates to her friend (and early biographer) Henriette Roland Holst: “For a revolutionary movement not to go forward means to fall back. The only means of fighting opportunism in a radical way is to keep going forward oneself.” Of course, not everybody was made for a life of permanent revolution, and the intriguing snippets of responses by some of her friends, provided in the editors’ superbly researched introduction, suggest that not all her friends agreed with her staunch opinions.

Yet the letters also challenge the stereotype of “Red Rosa” as a ruthless fighter by revealing Luxemburg’s sensitivity and humanity, a woman who, even from the darkness of her prison cell, showered others with her warmth and caring, as in this letter to Luise (Lulu) Kautsky from Cell No. 7 at Wronke women’s prison: “I would very soon get you laughing again, even though your last few letters sounded disturbingly gloomy,” she writes, cheering her moody friend by evoking memories: “When we two were together you always felt a little tipsy, as though we had been drinking bubbly.” She lifts her own spirits by singing the “Countess’s aria from Figaro” to an audience of blackbirds.

Letters are a means of staging the self, and Luxemburg performs herself with remarkable confidence and affection, extending herself into friendship and community as in this March 5, 1901, letter to Clara Zetkin, which begins: “My beloved Clarisse! Today is my birthday, and I am celebrating it by writing you a letter.” Ultimately, these passionate letters, which commemorate the 140th anniversary of Luxemburg’s birth, show the living, breathing and loving woman behind the legend of “Red Rosa.”