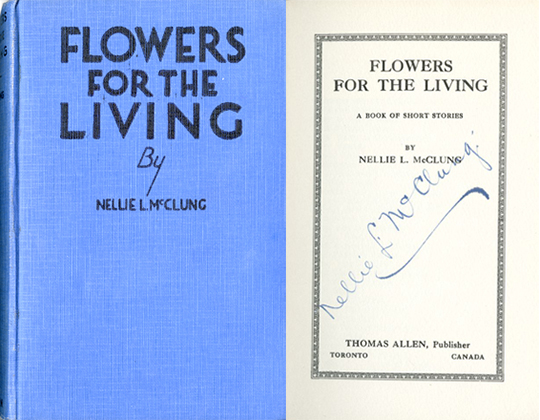 The first is a personal letter written by legendary Canadian women’s rights activist and writer Nellie L. McClung sometime after 1932. Addressed to her friend and fellow writer Anne Downe, the heartfelt letter expresses her profuse gratitude for Mrs. Downe’s favourable remarks about McClung’s book of short stories, Flowers for the Living (1931), which McClung had sent her. It is this very same copy of the book that is the second memento donated to the MLC Collections.

It was Anne Downe’s granddaughter, Kathryn Downe, who lives in Gagetown, New Brunswick, who happened upon the McClung letter while cleaning her mother’s house in preparation for a move. The discovery was serendipitous, as she describes it, explaining that she "found [the letter] in the drawer of an old desk.” Passed around to various family members, the letter had been separated from the book, which resided in Calgary, where it was owned by Cynthia Downe, Kathryn Downe’s aunt, who recently donated a letter by L. M. Montgomery to the MLC Research Centre and thought it would make a great home for the Nellie McClung mementoes.

"It is remarkable that the letter and the book by Nellie McClung are once again brought together with this double donation, one from the Maritimes, the other from the prairies,” explains Dr. Irene Gammel, Director of the MLC Research Centre. "This is thanks to the forethought of Cynthia Downe, who suggested to her niece that they donate the pair to the MLC, so that letter and book can be viewed and studied as a unit. We are incredibly thankful to both Cynthia and Kathryn Downe and to the spirit that guides this double donation.” 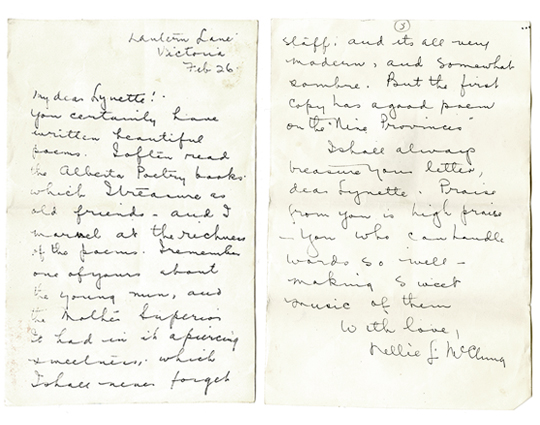 The tone of the letter is warm and generous, and occasionally effusive, as McClung showers Anne Downe with overflowing praise in the letter’s first sentence: "My dear Lynette,” she writes, using Anne Downe’s pseudonym, "You certainly have written beautiful poems. I often read the Alberta Poetry books which I treasure as old friends – and I marvel at the richness of the poems.”
Clearly the two women shared a fond friendship, as McClung writes: "I am so glad you like my book and found it brought back pleasant memories. I always think of our times in Calgary as a very bright spot in our lives. We enjoyed such a congenial circle of friends, – and you among them.” The letter also refers to numerous other friends and acquaintances, including two women referred to as "Dear Ethel + Jessie ... Those two girls have poets’ souls surely.”

These two artifacts will be housed in the newly renovated MLC facility at 111 Gerrard Street East at Ryerson University, where they will be safeguarded in a climate-controlled archival display. This home is all the more fitting as McClung’s Magazine, a feminist magazine based out of Ryerson University, pays tribute to the author and suffragist.

Nellie McClung’s letter is a testament to her unwavering support of women, and their creative output in Canada. The letter closes: "I shall always treasure your letter, dear Lynnette. Praise from you is high praise – you who can handle words so well – making sweet music of them.”

Nellie McClung (1873-1951) was a social and political activist instrumental in securing women’s rights in Canada. In 1916, she rallied and won the legal right for women to vote in Manitoba, making it the first province to adopt this law. As part of The Famous Five, a group of feminist activists working in the early to mid-twentieth century, McClung petitioned the Privy Council to redefine women’s status, which up to the point had not included them under the definition of "persons”. On October 18, 1929, the judgment was made which would drastically change women’s roles in Canadian political life, granting them the unfathomably long overdue status of "persons” and welcoming them to serve as members of the Senate of Canada. In addition to her formidable contribution to gender equality in Canada, McClung was an accomplished writer, publishing 16 books throughout her life.