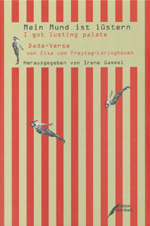 One of the most colourful figures within the New York Dada group, Elsa von Freytag-Loringhoven was also an innovative poet. When she lacked the words to express the modern experience, she created new ones: wombcrucible, phalluspistol, or spinsterlollypop. She wrote in German and English, sometimes using both languages in one poem. She asked for a new punctuation system that would allow her to express emotions in “joymarks.” Whether long or condensed, cryptic or funny, austere or typographically playful, with harmonious or irregular rhythms, with rhymes or without a clear poetic structure—her forms continually change like the colourful costumes of the Baroness.

Her daring chemistry in words was openly admired, and her courage in breaking taboos secretly respected; like no other woman poet of her era she made use of blasphemy, obscenity, and scatology such as a farting God or nuns on wheels. She openly challenged her contemporaries – and called Marcel Duchamp M'ars (my ars) und William Carlos Williams W.C. (Water Closet). Yet her themes—love and aging, the war and the city—were always serious. „I loved world because I could do love in it / I love world because I can do art in it.” Even though she was much admired during her life, she was quickly forgotten after her death.

In this worldwide first edition of her poetry, Irene Gammel has collected a selection of her German and English poems from archives.