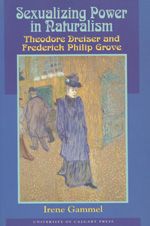 Sexualizing Power presents a new model for reading modern literary naturalism through the lens of feminist and Foucaultian theory. At a time when modernism was fast becoming the dominant paradigm of literature, Theodore Dreiser (1871-1945) in the United States and Frederick Philip Grove (1879-1948) in Canada resurrected the conventions of naturalism, a European literary movement generally associated with the novelist Emily Zola. Cleverly exploiting naturalism's focus on the physical body, its desires, instincts, and materiality, they zoom in on the very issues that preoccupied the modern age – sexuality and the New Woman – aggressively pushing the boundaries in representing female and male sexuality in literature in graphically realist forms.

By examining such crucial novels and semi-autobiographical writings as Sister Carrie A Gallery of Women (1929), Fanny Essler A Search for America (1927) and Settlers of the Marsh (1925), Gammel shows that far from being always frank and liberating in their portrayal of female sexuality, these novels also contained the New Woman's elan, ultimately defending some traditionally male rights that were rapidly coming under siege in the modernist age. (1900), (1905).

Now available as an ebook! Click here to view.

Irene Gammel has authored a major trail-blazing text of feminist (re)readings of Dreiser, one that leaps into the lacuna in feminist analysis of his work. If we are on our way to a post-gender world, her substantive book helps us understand how we get there by showing us where we've been.
— Kathy Frederickson, Dreiser Studies 28.1, 1997

Gammel's book is extremely lucid, readable and coherently presented. ... Anyone interested in Grove and Dreiser, in naturalism or in the sexualization of power and discourse will find much suggestive – even provocative – material in this book.
— Faye Hammill, British Journal of Canadian Studies 12, 1997

In Sexualizing Power in Naturalism, Irene Gammel has not only provided us with a new matrix within which to read F. P. Grove, she has challenged the basis on which the Canadian literary canon has been constructed.
— Richard Cavell, American Review of Canadian Studies, 28.1/2, 1998

Sexualizing Power in Naturalism is a very ambitious work. At a time when even conservative critics are questioning the concept of literary history, Gammel proposes a study of literary naturalism that spans two continents and at least three cultures. Such a study demands not only a command of several national literatures (including French) but also a strong grasp of literary theory, cultural theory, post-colonial theory, and feminism.
— Paul Hjartarson, English Studies in Canada 23.4, 1997

Irene Gammel's study ... should become the indispensable text for any further study of either or both [Theodore Dreiser and Frederick Philip Grove]. [She] deftly moves their texts away from the monologic discourse that critics have for the most part structured them as.
— E. D. Blodgett, Ariel: A Review of International English 24.2; Spril, 1993

This is a thorough, provocative, well-researched, and engaging scholarly study of naturalism as it was transplanted to North America. It is well-grounded in theory, and Gammel explains her terms of reference well.
— Lisa Potvin, Canadian Comparative Literature Review 25.1/2, 1998

While opening with an essay by Shelley Fisher Fishkin gives Theodore Dreiser: Beyond Naturalism a certain big-name appeal, it is the work of the book's next contributor, Irene Gammel, that stands out among the five essays dealing with gender. Foregrounding her thoughts in an analysis of "Emanuela" from Dreiser's A Gallery of Women, then ranging impressively over a number of major and minor works, Gammel questions whether Dreiser's reputation as a sexual liberator is actually deserved.
— Paul M. Hadella, American Literary Realism 29.2, 1997

Two essays in Gogol's volume ... daringly unite literary and biographical criticism. ... Shelley Fisher Fishkin and Irene Gammel read Dreiser's life in ways that enrich their analyses of gender and sexuality in his works. Their interpretations made me eager to read equally sophisticated analyses of Crane ... Fishkin, Gammel, and their colleagues ... have an implicit message for every Crane critic: Go, and do thou likewise.
— Michael Robertson, Stephen Crane Studies 7.2, 1998