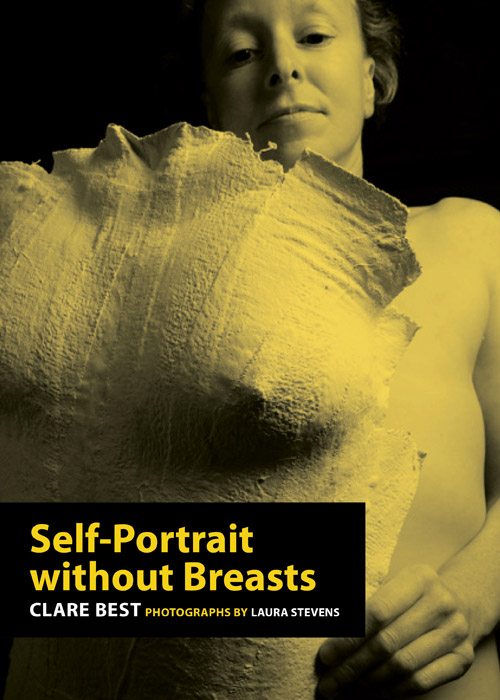 As a teenager in the 1970s, British poet Clare Best nursed her mother through the trauma of two radical mastectomies. Other family members developed breast cancer in the decades that followed. When she reached her late 40s, the age at which her mother first had the disease, doctors told her she too had a high risk of breast cancer. She chose preventive bilateral mastectomy, without reconstruction. "I also chose not to disguise my new flat chest," Clare Best explains.
During this difficult time of decision-making, Clare turned to art. Making plaster casts of her body, she collaborated with photographer Laura Stevens who took photos before and after her mastectomy. As Clare recalls: "Gradually, what had begun as my way of coping, evolved into a major creative project." The result is a sequence of evocative photographs, and her finely honed book of poems Excision, which incorporates the sequence Self-Portrait without Breast.
With 88,800 Canadian women estimated to be diagnosed with cancer in 2012, Clare's story and work have profound resonances. Raising haunting questions about beauty, identity, loss and creativity, Clare Best, a poet at the University of Brighton and the Open University in London, and the author of Excision (Waterloo Press, 2011; shortlisted for the Seamus Heaney Centre Prize 2012), will talk about her experiences, her poetry, and her self-portraits. Her talk Self-Portrait without Breast is illustrated with photographs by Laura Stevens.
The talk will be followed by a discussion and book signing. Refreshments will be served. All members of the Ryerson community and the general public are welcomed.
There is no charge for this event. There will be a draw for a free copy of the book.
Download the press release
When: Wednesday, October 10, 6:00 - 7:30 PM
Where: Modern Literature and Culture Research Centre
111 Gerrard Street East, Ryerson University, Toronto
RSVP:admin@mlc.ryerson.ca | 416-979-5000 ext. 7668 | www.ryerson.ca/mlc