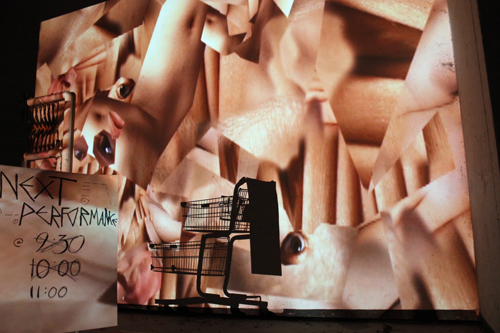 Last Saturday, September 29, night the Distillery District was aglow with the spirit of Dada, as we made our way down through the crowd to see the Nuit Blanche performance of "TEKE,” the piece prepared by our MLC creative team for Dada Reboot!, based on Elsa von Freytag-Loringhoven’s eponymous 1921 poem. It was a memorable night.

Imagine a huge dark industrial garage in the condo part of the district, just below Mill Street, where the path might otherwise be less travelled by Nuit Blanche revelers. As you enter, you see projected on the wall, three metres tall, a towering video collage of animated body parts, moving eyes, arms, legs. The concrete floor in front of it is covered with a living room carpet with flowers. A shopping cart is parked in the middle of the carpet, with a large sign, "Next performance at 11:00 PM.”

In less than 2 minutes, they are back with an audience of ten or so in tow.

Annie and Cassandra now take their positions in front of the wall, and stand silent on the large carpet, as the body fragments begin to dance on their skin. Then they begin their Dada incantation: 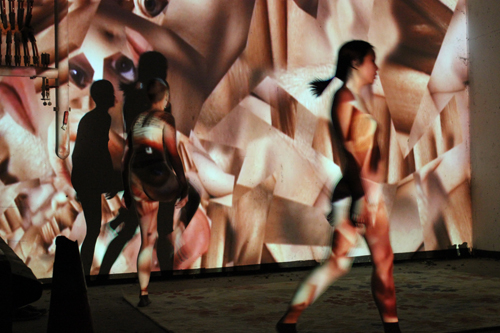 As their bodies become animated and entranced following the rhythm of the sounds, Annie grabs Cassandra’s arm, reading, consuming, and ejaculating the poetic sounds inscribed there, their bodies becoming alive through sound, reminding us also of Charles Bernstein’s description of sound as "the flesh of language.”

With cameras flashing, Annie and Cassandra leave their viewers compelled, alternating in the recitation of sound to the final flourish when sound becomes again silence. We stay for several performances, with each performance becoming a permutation of the previous, as the performers also engage their audience moving close to them, staring.

At midnight we find TEKE on the Centre Stage of the Distillery.

Thank you to Annie Wong, Cassandra Witteman, and David Jones for your terrific creative engagement of Dada and the Baroness’s "TEKE” at Nuit Blanche last night. Your "Dada Reboot” contribution was inspiring and the MLC is proud of your creative exploration of the connection of sound and body. 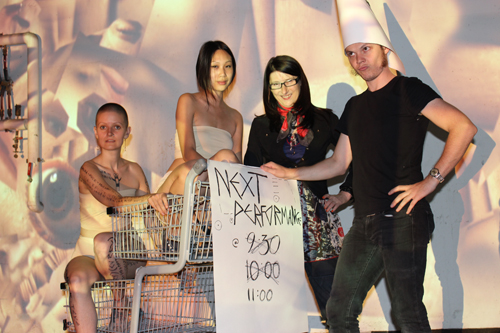