Irene Gammel and John Wrighton’s study "‘Arabesque Grotesque’: Toward a Theory of Dada Ecopoetics” has been published by Interdisciplinary Studies of Literature and the Environment (Oxford). This new study advances a theory of Dada ecopoetics, exploring a number of crucial themes including Dadaists’ radical dismantling of nature/city boundaries; aesthetics of desublimated trash; a multisensorial immersive perspective; an antipastoral aesthetic; and ultimately, a radical ecopoetic liminality.

While modernism and its avant-garde are often excluded from studies of environmental or ecological concerns, associated mostly with modern technologies, urban life, and expanding media, this study proposes that the aesthetic trajectory that culminates in postmodern ecopoetics likewise extends backwards to WWI-era Dada ecology.

From a gendered perspective, the essay’s case study of Elsa von Freytag-Loringhoven’s Dada poems demonstrates how she simultaneously challenged male Dadaists’ dominating focus on machines and the vitalist Lebensphilosophien (or philosophy of life) of the fin de siècle by asserting the centrality of organic networks and the body’s position within them.

Calling for new critical attention at the intersection of poetry, ecology, and Dada, this study explores the poetics of porous boundaries within a world of unprecedented industrialization and environmental precarity. Ultimately, it aims to reconfigure the relationship of modernism’s avant-garde to the environment, showcasing their interconnections rather than their distinctions.

Irene Gammel and John Wrighton. "‘Arabesque Grotesque’: Toward a Theory of Dada Ecopoetics.” Interdisciplinary Studies of Literature and the Environment (Oxford) 10.1093 (Fall 2013): 1-22. 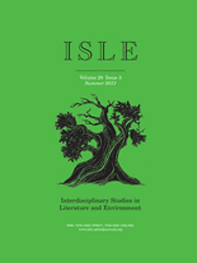 Read ‘Arabesque Grotesque’: Toward a Theory of Dada Ecopoetics PDF
Visit Interdisciplinary Studies in Literature and Environment Online
​Click for more on our Publications and Books