Irene Gammel's article "Lacing Up the Gloves: Women, Boxing and Modernity" explores women's early twentieth-century engagement with boxing as a means of expressing the fragmentations and contradictions of modern life. 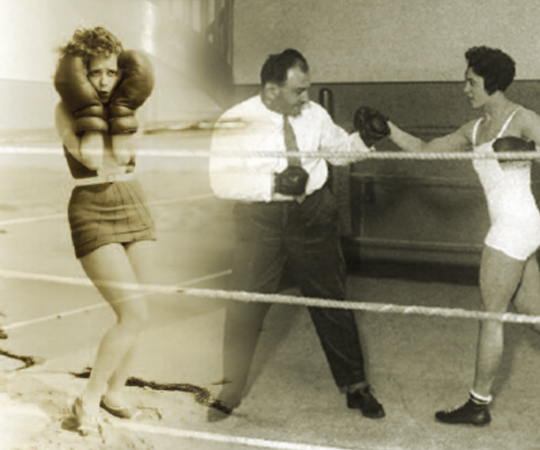 Abstract
Equally drawn to and repelled by the visceral agonism of the sport, female artists and writers of the First World War and post-war era appropriated the boxer's virile body in written and visual autobiographies, effectively breaching male territory and anticipating contemporary notions of female autonomy and self-realization.
Whether by reversing the gaze of desire as a ringside spectator or inhabiting the physical sublime of boxing itself, artists such as Djuna Barnes, Vicki Baum, Mina Loy and Clara Bow enlisted the tropes, metaphors and physicality of boxing to fashion a new understanding of their evolving status and identity within a changing social milieu.
At the same time, their corporeal and textual self-inscriptions were used to stage their own exclusion from the sport and the realm of male agency and power. Ultimately, while modernist women employ boxing to signal a radical break with the past, or a reinvention of self, they also use it to stage the violence and trauma of the era, aware of limits and vulnerabilities.
Read the Article
View Dr. Irene Gammel's bio here
Keyword
Boxing; Gender; Modernity; Self-Representation; Women
Citation
Irene Gammel. "Lacing Up the Gloves: Women, Boxing and Modernity." Cultural and Social History (Bloomsbury) 9.3 (September 2012): 369-390(22)

Find out more about Cultural and Social History (Bloomsbury)