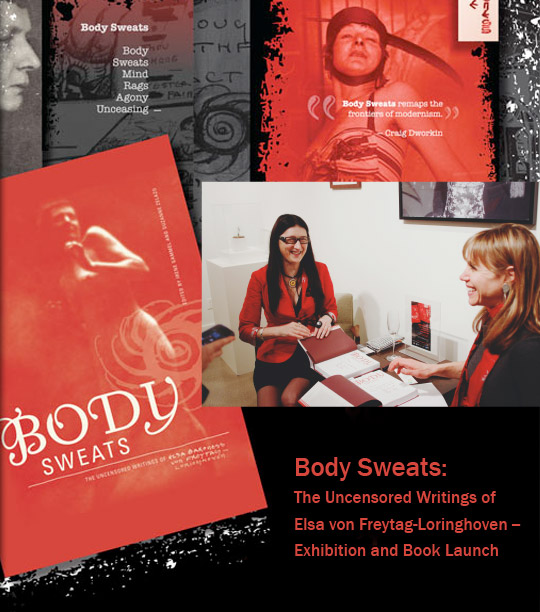 The event went really well and we had a good turn-out (with guests from Moncton, Toronto, Winnipeg, Vancouver, Toronto, Berlin, Paris and of course New York). The night of the launch was a whirlwind of excitement beginning with the long anticipated book delivery. It wasn’t until just moments before the event started at 6:00 PM that our books arrived, looking magnificent—like a work of art. With the beautiful cover, the color, and the glossy paper, the Baroness could not have asked for a more opulent "dress” for her belated poetry book. That the book is published one hundred years after she first arrived in New York, as a posthumous realization of her "life’s ambition,” made this event all the more meaningful.

Accompanying the book launch was our exhibition showcasing the Baroness’s rare art works, Limbswish, Cathedral, Enduring Ornament, and Earring Object, along with her original poetry displayed on the walls. Complementing these poems written on fragile paper and secured behind glass, the Body Sweats title poem was prominently showcased in crimson vinyl decals on the wall facing the gallery door, while a large banner of the book cover adorned the South wall. Stepping into the gallery that night I had the sense of a true Gesamtkunstwerk worthy of the Baroness’s high ambition. Francis Naumann brought an original 1922 copy of The Little Review, which he had just acquired, and we were able to compare the Baroness’s poem "Affectionate” in this issue with the original visual poem, "Wheels are Growing on Rosebushes,” which was displayed in our exhibition and featured in our book. We had great fun explaining the poems and art work to the guests and together decoded and debated some of the fine details. It was a lively exchange, one that would surely have pleased the Baroness. One guest, Molly White, even arrived with a CD, that she produced, with a cover proclaiming "B is for Baroness”!

Like a theatre production on opening night, this launch relied on many different aspects coming together smoothly after weeks and months of planning. I would like to thank our research coordinator Cait MacIntosh for her leadership and coordination; and our students, Jenny LeRoy, for helping to establish connections and spreading the word in NYC; Valerie Velardo, for helping as a curatorial intern at Francis Naumann Fine Art; Amy Smith, for creative leadership in web publicity; Amy Goudge, for carefully researching addresses and mailing our reminders; Laura Phillips, for surprising us all with her CBC connection; and Matthew Rushworth, for supplying us with images often at short notice. I am also grateful to Jenny’s friend Alyssa MacKenzie for generously helping us.

To give you a sense of the intricate lead-up to the event, I would like to take you back for a moment to Thursday when Valerie and Cait helped paint the walls and packaged the ceramics from the previous show. When we arrived Mark Kelman had already delivered his art objects. As it turned out, Limbswish did not fit into the vitrine and we had to procure a large 6 x 4 foot sheet of plexiglass to secure Limbswish for public viewing, which was a challenge, given our exceedingly modest budget and tight timeframe within which the plexiglass had to be ordered, cut to size, picked up and installed. Miraculously it all worked out and Limbswish looked magnificent. Meanwhile Valerie travelled to 118 Riverside Drive, New York, to pick up an $80,000 original painting, Freytag-Loringhoven’s Forgotten Like this Parapluice, on loan from Elrick-Manley Fine Art Gallery, and featured in our book. As the team hung the Baroness’s original poetry, interspersed with photographic portraits of the Baroness, Francis helped us display the Baroness’s three-dimensional art objects in vitrines, carefully mounting Elsa’s 1913 found object iron ring, Enduring Ornament, with the help of a needle, making it look upright and proud. Throughout this process, Dana impressed us all with her amazing technique of lifting and moving heavy pedestals with apparent ease using only her arms and legs to support them. Meanwhile, Cait worked on the decals, standing high up on the ladder and peeling off the paper until the poem’s crimson letters travelled the wall from the top to the bottom. By Friday late afternoon, the picture was complete: the wine table set, the bowls of nuts filled, and our basket of posters ready to be handed out as gifts to the guests.

By the time the early bird guests arrived for the launch, our team looked the part, with the help of a little lipstick and having quickly exchanged the jeans for snazzy black dresses. I had slipped on my new red silk jacket from Peach Berzerk in Toronto with Elsa’s dancing body printed on the front, and her portrait with the crown and signature on the back. As Francis Naumann and I addressed the guests, we talked about the Baroness and the book, highlighting also the Baroness’s own desperate desire to have her poetry published and reach an audience. Suzanne Zelazo, who had donned a red silk scarf with Elsa’s poems printed on it, captured the tone by giving a beautiful reading of four poems including "Novemberday” and "Spring in Middle.” Jenny LeRoy read a letter by Gisela Freytag von Loringhoven, bringing greetings from Tuebingen on behalf of the Freytag-Loringhoven family. Our passionate emcee for the event was Jean Paul Boudreau who was wearing a matching red silk tie with Elsa symbols printed on it; he also read a heartfelt letter by Roger Conover, our editor at MIT Press, who was unable to attend. Suzanne and I had fun signing the books with a red-ink fountain pen, and since the paper was glossy, our signatures took a long time to dry.

We continued the celebrations and discussions near the gallery at the Russian Samovar on 55th Street, where our team was joined by Elsa art collectors Mark and Georgina Kelman (without whom this event wouldn’t have been possible), Freytag-Loringhoven scholar Gaby Divay (Winnipeg), and Murielle and Jean Guy Leblanc. Jean Paul who delivered a most memorable solo dance performance to the live Russian music!