Despite the uncharacteristically cool and dreary weather for an early February day in Los Angeles, the UCLA Center for the Study of Women's 24th annual Thinking Gender conference was abuzz with passionate presentations and stimulating conversation.
New and upcoming gender scholars from all disciplines and corners of the world gathered at the UCLA Faculty Center on Friday, February 7, 2014, to share their latest research, garner invaluable feedback and networking opportunities, and discover new directions and theories for their work in gender issues. For many panelists, including myself, the day marked their first foray into the world of academic conferences. 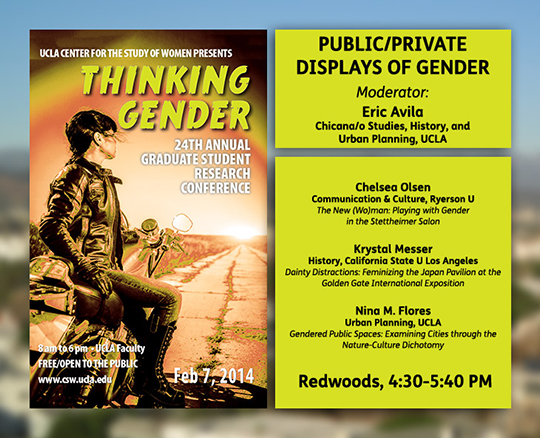 Over the course of the day, participants were able to choose from 80 panels, with topics as wide ranging as popular cultural representations of girlhood, international and transnational women's activism, queer fiction, cyberfeminism, biopower, and gender play. The conference's plenary session, "Somatic Pleasures and Traumas: Seduction, Senses, and Sexuality," focused on how different women negotiate the complex interplay of pain and pleasure in their sociocultural contexts. Although all of the panels offered a unique perspective on gender's role in the world, there were some evident through-lines and trends to be investigated further. Many panelists, for example, showed a great interest in how women operate within oppressive patriarchal structures and discourses in order to deconstruct them from the inside. In her plenary session presentation, conference coordinator Mila Zuo examined how Asian-American actresses like Joan Chen and Lucy Liu occupy the exotic Asian female stereotype so as to resist the subject/object relationship inherent to the male gaze. Meanwhile, other presentations examined how women have used and will continue to infiltrate established government structures in countries as varied as Sweden and Pakistan in order to improve their status in society. In terms of theoretical trends, affect theory appeared to be the most popular framework of the day, with panelists evoking affect theorists like Sarah Ahmed and Jasbir Puar (who happens to also be the keynote speaker at this year's edition of the Communication and Culture GSA's Intersections conference) to analyze our attraction and/or repulsion to certain images in popular culture, whether it be Miley Cyrus twerking on the VMAs stage with Robin Thicke or the eroticization of women in B-movie thrillers.
For my panel "Public/Private Displays of Gender," I presented my MRP research (supervised by Dr. Gammel) into the Stettheimer salon in New York and its playful attitude towards gender (see abstract below). My fellow panelists, Krystal Messer from CSU Los Angeles and Nina M. Flores from UCLA, focused on the feminization of the Japan Pavilion at the Golden Gate International Exposition of 1939 and the gendering of urban space, respectively. Our moderator, Professor Eric Avila from the Department of Chicana/o Studies at UCLA, provided us with questions for re-conceptualizing and furthering our research: How does gender inform urban space? How are space and identity interrelated? In what ways can we manufacture space to produce new and subversive gender identities?
Overall, Thinking Gender made for an excellent first conference experience. I was able to form connections with graduate scholars from London, California, and Kingston, and engage with emerging theories that can enrich my own research in the future.
As a closing note, I would like to thank Dr. Irene Gammel, the Communication and Culture department, and the Yeates School of Graduate Studies for making this opportunity possible.
Chelsea Olsen
Communication and Culture
Chelsea Olsen's Abstract:

In recent modernist scholarship, there has been an increased attempt to theorize the modernist literary salons of early 20th century Europe and the United States as subversive, collaborative and fluid spaces. While Emily Bilski and Emily Braun conceptualize the salon as a private space in which women could transform the presumed inferiority of the feminized domestic sphere and participate in stereotypically masculine exercises of intellect and power, Janet Lyon recognizes the salon as "a living theatre" where habitués could constantly perform and alter their personae. As of now, however, there lacks any attempt to reconcile all of these theoretical elements to reveal the full feminist potential of modernist salons. In order to expose this potential, I analyze how the Stettheimer salon in New York allowed for a playful attitude towards gender by examining the Stettheimer sisters themselves, their creative works, which shaped and were simultaneously influenced by the salon's atmosphere, and their effeminate habitués. In using feminist concepts of sexual politics, gender performativity, and the "New Woman" as a theoretical framework, I argue that the Stettheimer salon served as a space in which the naturalized link between sex and gender was problematized and individuals were enabled to play with masculinity and femininity in subversive ways.
View Chelsea Olsen's Personnel Page