Dancer Isadora Duncan loved nothing more than her long silken scarves—until pleasure turned to peril in 1927, when her scarf became entangled in the wheel of the car she was travelling in, strangling her to death. A celebrity fashion victim, she offers an exemplary case for Alison Matthews David, an associate professor of Fashion and long-time research associate at the Modern Literature and Culture Research Centre, who studies the lure and hazard of fashion that causes bodily harm. 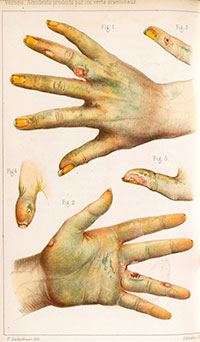 ​The menace that lurks behind the elegant exteriors of nineteenth- and twentieth-century fashions for both men and women has long escaped detection, yet is the stuff of untold Gothic stories: dresses dyed in arsenic green, mercury deposited in beaver top hats, tightly laced footwear or corsets, and combs made of flammable celluloid. As the research shows, expensive garments, shiny footwear, and immaculately white linen brought not only pleasures but deadly dangers to both makers and wearers.​

"The most exciting part of this project has been the detective work involved in ‘unravelling’ historical questions about how clothing harmed human health,” says Dr. Matthews David. Along with her collaborator, Elizabeth Semmelhack, Senior curator of the Bata Shoe Museum, Alison collected the materials from archives in Paris and in England: "There we gathered material at archives and museums such as the famous Wellcome Medical Library in London, the Palais Galliera, or Musee de la Mode de la Ville de Paris, and the Northampton Shoe Museum.”

Once collected, the archival garments and accessories were subjected to rigorous scrutiny and analysis to answer fundamental questions such as: How poisonous exactly is the fantastic green dress a private collector in Australia shipped over to Ryerson? Or, as Matthews David asks: "Did any of our artifacts from the extensive footwear collection at the Bata contain arsenic or mercury?” In order to find the answers, the fashion scholars enlisted the expertise of Ana Pejovic-Milic, chair of Physics at Ryerson, and Eric Da Silva, a doctoral student in physics who conducted detailed tests on the pieces in the Ryerson lab. Using state-of-the-art nuclear physics technology, they found the "arsenic green” dress to be poisonous. 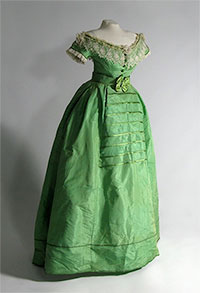 Not satisfied with just tracking the physical evidence of poisonous substances, Matthews David also studies the cultural implications attached to the "fashion victim” concept. "When we use the expression we tend to think of those who have gone to extremes in their wardrobe,” she explains. "At the time of the Industrial Revolution, the meaning of the phrase was literal: that one was in danger of risking one’s health by following the latest fashion trends.”

The research is bound to find a wide audience among students and scholars of fashion and health, as well as inspire other researchers at the MLC Research Centre. Dr. Matthews David’s book, Fashion Victims: The Dangers of Dress Past and Present, is slated to be published with Bloomsbury Academic in September 2015. An exhibition, Fashion Victims: The Pleasures and Perils of Dress in the 19th Century, co-curated by Dr. Alison Matthews and Elizabeth Semmelhack, runs at Bata Shoe Museum in Toronto, from June 2014 until June 2016.

Read the Globe and Mail review of the Fashion Victims exhibition.