On November 3, PhD student Emma Doran travelled to McGill University in Montreal, to present her paper, "The Visual Spectacle of Dance on Stage and on Screen in the First Year of Cinema” at the Canadian Association of Cultural Studies Conference. Her paper focused on American dancer Loïe Fuller. Here is her conference report.​ 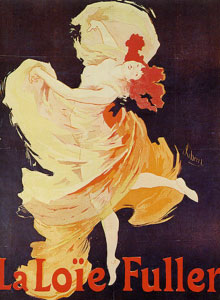 Having just completed my doctoral proposal, and having also collected a large part of my primary research materials, I was excited to present my scholarship as part of a panel exploring the topic of "Distant Reading: Media Histories and Local Newspaper Sources,” a session organized and chaired by Dr. Paul Moore (Ryerson). The panel asked us to reflect on how accessing newspapers via digital interfaces reveals new information regarding circulation and theatrical practice. This focus was fruitful for my doctoral project since my methodology involves compiling archival newspaper documents of American dancer Loïe Fuller, who figures prominently in my dissertation. More specifically, I was invited to explore the role the newspaper played in both promoting theatrical shows and cultivating audience expectations during this pivotal time in which Fuller’s live cinematic choreographies were shown in the same theatre venues as the first vitascope film screenings.

Upon arriving in the United States in February 1896, Loïe Fuller’s reputation had preceded her. As a main attraction at the Folies Bergère in Paris, Fuller danced in voluminous silk robes while projected patterns of abstract light reflected off her. Transforming her body into a moving, three-dimensional screen Fuller was at once corporeal and technological.

By using newspapers to map Fuller’s performances through the United States during this crucial year for moving images, I explored how encounters with the visual spectacle of the electric, coloured movement of dance were impacted by the transition from the liveness of the vaudeville stage to materially and temporally altered filmic images. In doing so I asked how the memory of the performance space haunts new modes of seeing within it. How do the ghosts of the live dancers inhabit the cinematic image?

I attended several illuminating panels and keynote addresses during this conference. Of particular interest was a panel exploring "Mapping Space and History,” in which the presenters engaged with different methods of visually mapping historical information. In particular, Lillian Radovic (McGill) presented fascinating research on visual noise maps in New York City throughout the twentieth century. In her paper "Looking Loud: Visualizing Noise in New York City and Beyond” she paired visual archives with historical information about noise concerns in Manhattan, while discussing possible methods and limitations of amalgamating the information on one map.

"The Visual Spectacle of Dance on Stage and on Screen in the First Year of Cinema.” Canadian Association of Cultural Studies. November 4-6, 2011. McGill University, Montreal, Quebec.

For more on the CACS go to: http://www.culturalstudies.ca/english/eng_newsconferences.htm