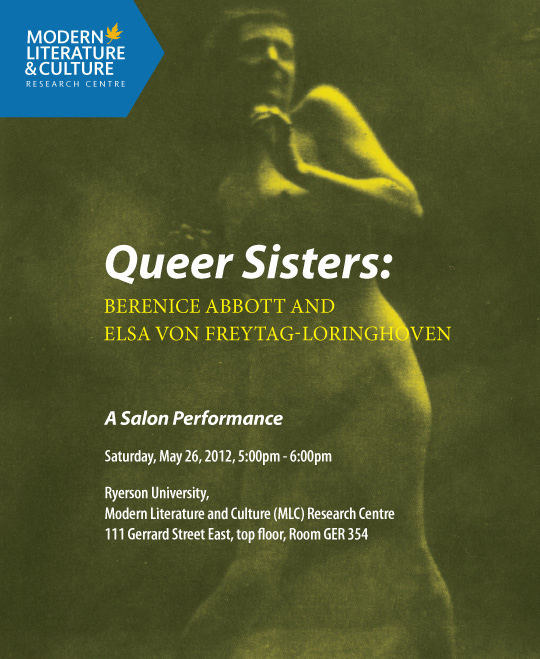 One of the most important early influences in the artistic development of Berenice Abbott was the Baroness Elsa von Freytag-Loringhoven (1874-1927). A German émigrée Dada poet and early performance artist in New York, the androgynous Baroness famously dressed up in a tomato-can bra. Abbott recalls: "She invented and introduced trousers with pictures and ornaments painted on them. This was an absolute outrage." Sharing similarly difficult family histories, the pair practised their non-conformity by flouting gender and sexual identities, publicly radicalizing portraiture, and becoming fast friends. It was the Baroness who encouraged Abbott to set her sight on Paris in 1921.

In 1923, both women rekindled their friendship in post-war Berlin, when the city was in the throes of violent inflation and social turmoil. Berenice worked as a dance teacher in Berlin, visiting and supporting the Baroness. To thank Abbott, the Baroness dedicated the poem "Pastoral" to her, conjuring up their friendship in fragments of memory. She describes Abbott in Dada fashion as "Strolling/ Over/ From/ Pary / ... / Spotting/ me --/ Her/ Mimicry / ... / Some/ Queer/ Dope/ Sister!" She also painted two remarkable portraits dedicated to Berenice: Forgotten Like This Parapluice and Dada Portrait of Berenice Abbott.