Spurred on by MLC research, Dr. Jacqueline Bobak has created a cross-disciplinary performance and research project about the art and lives of the Baroness Elsa von Freytag-Loringhoven, Emmy Hennings, Mina Loy, and other seminal female Dadaists, that promises to pull back the curtain on Dada’s leading women. “Dada Divas unearths and re-imagines the stories and creative works of important female artists and performers who were among the originators of the Dada movement,” explains Bobak, founder of Dada Divas.

Dada Divas took form shortly after Bobak, Mel Powell Chair in Music and professor of voice at the California Institute of the Arts, first encountered the Baroness in Irene Gammel’s book, Baroness Elsa: Gender, Dada and Everyday Modernity, A Cultural Biography. Bobak, who had been setting unusual Futurist and Dada works to music at the time, describes being “both shocked and intrigued” by the discovery that would lead her research and musical projects onto a new path. 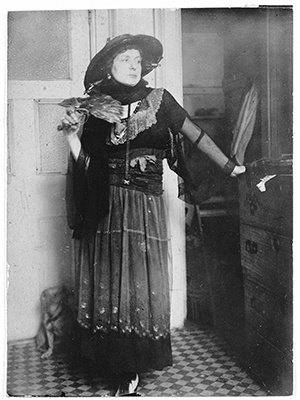 Bobak’s project uses music and performance to put Dadaist women on a global stage, and also unpacks their critical and artistic contributions through publications, lectures, and a year-long course at the California Institute of the Arts that challenges students to create their own works inspired by Dada’s divas.

The series of vignettes that make up the stage show mixes aspects of Dada, Futurism, cabaret, variety shows and opera with contemporary experiments in sound and performance art. As audience members take to their seats, backstage activities are made purposefully transparent in a nod to traditional Futurist and Dada events, disrupting what Bobak refers to as the “pomp and secrecy surrounding the ritual of theater.” In “Klink-Hratzvenga” the artist representing the Baroness mourns the Baron’s suicide following World War I with an emotional unaccompanied solo of the Baroness’ sound poetry that expresses the divas’ loathing of war. Others explore central themes of the Dada movement that remain relevant today, such as the status of women, emigrée life, and substance abuse.

“I am so thrilled to hear about the many ways that Professor Bobak, contemporary artists, and students are engaging with the meaningful contributions that women made to the Dada movement with Dada Divas. I look forward to seeing how the project grows during the 100th year of Dada and beyond,” says Irene Gammel, the MLC Director.

Vocalists, opera singers, noise artists, and composers joined Bobak on November 26, 2015 in Brno, Czech Republic, for a preview performance of Dada Divas in advance of a premier performance that will mark the Dada centenary in 2016. To learn more about Dada Divas visit http://dadadivas.com. You can find Carmina Escobar’s performance of the Baroness’ sound poem “Klink-Hratzvenga” in the “Recordings” section of the website. 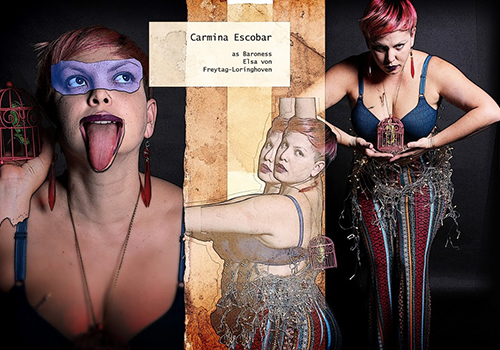 Another performer who has been inspired by Freytag-Loringhoven’s sound poetry is composer and performer Anat Pick, who has performed the Baroness’s work internationally and is a sound poet in her own right.

Find additional information about the MLC’s research on the Baroness Elsa von Freytag-Loringhoven at http://mlc.ryerson.ca/themes/elsa-von-freytag-loringhoven.