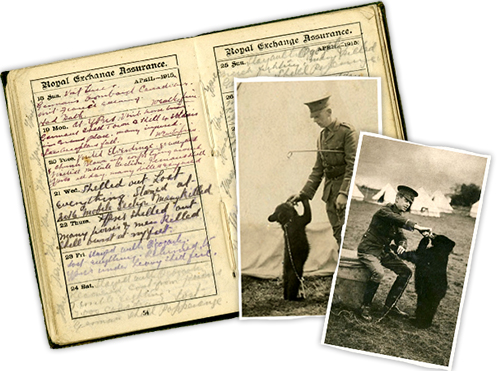 A.A. Milner's Winnie-the-Pooh (1926) has endeared itself to millions of readers worldwide. Many readers know that the story of the most famous bear in the world has Canadian origins, yet few people know that the story of Harry and Winnie is also the story of Canada at War. This intertwined story is at the heart of Remembering the Real Winnie: The World's Most Famous Bear Turns 100 (November 5 to December 7, 2014, at the Ryerson Image Centre). Central to the exhibition is the war diary of Harry Colebourn, the British-Canadian army veterinarian from Winnipeg, who adopted the bear and named her Winnie after his hometown. He brought her to Britain, where she became a regimental mascot for the soldiers.

The war diary, on display at the exhibition, offers insight into the life of an officer who experienced the war from beginning to end. Six volumes of entries cover the shelling of Ypres, the trenches of the Somme, the victory at Vimy, and the armistice. Colebourn reported on his life at the front and of course he reported on Winnie.

Remembering the Real Winnie showcases the depth of the Colebourn family archive, which is being exhibited for the first time in its entirety. The display includes photographs of Winnie at the training camps in Canada and England with Harry and other Canadian soldiers. Also present are Colebourn’s personal photographs and his veterinarian bag, which dates from circa 1915 and contains tools for large and small animals. Two other highlights include a cigarette case inscribed with the battles Colebourn participated in, and a letter penned by young Christopher Robin, in which he talks about Pooh.

The exhibition features a website that allows viewers to experience the diaries in digital form. There is also an interactive site that fosters online storytelling. Visitors at home and far away are invited to engage with the story of Harry and Winnie.

The exhibition and all related events are open to the general public and are free of charge.

For more information regarding the research and the exhibition:
admin@mlc.ryerson.ca or gammel@ryerson.ca
Contact the RIC: ric@ryerson.ca or 416-979-5164

With the participation of the Archive of Modern Conflict; Ontario Veterinary College; University of Guelph; Narrative PR; Stamp; and Married to Giants.

Special thanks to Lindsay Mattick for making The Colebourn Family Archive available to Ryerson University for purposes of exhibition, research and study.