Barbara Postema, Postdoctoral Research Fellow at the MLC Research Centre, spent January 28 and 29 in the Documentation Center of the Cité internationale de la bande dessinée et de l’image, in Angoulême, France. The Cité is housed in a row of former cognac warehouses along the Charente river, now expanded with a large modern annex. Here is her report.​​ 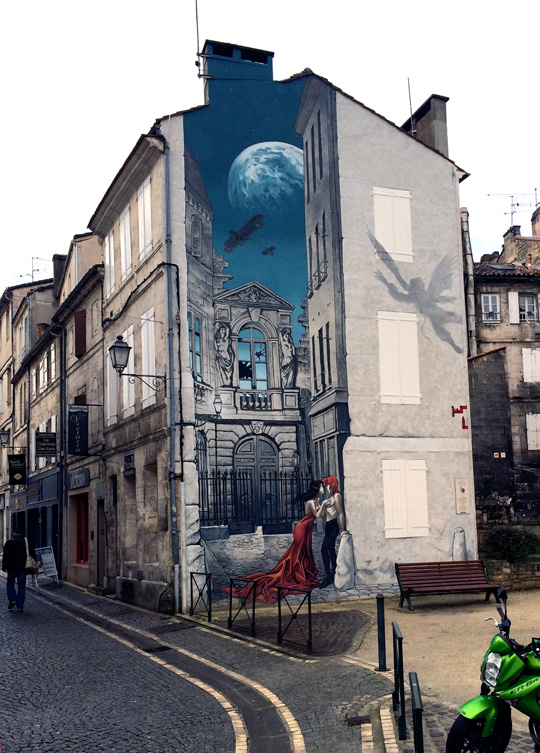 The Documentation Center was bright and quiet, with stacks of works of comics studies available at hand. The rare materials I had come for had been retrieved for me from the archival storage of the Center. These included original issues of the Chat Noir magazine, published weekly between 1894 and 1898. I was allowed to examine these closely and take photos. In fact, photography was preferred to photocopying, which would potentially be much more damaging to the aging paper. Even as it was, it was painful to see little flakes of yellow paper left behind after I had leafed through and studied the stack of magazines.

Almost every single issue I studied contained a full-page silent comic, and in addition to photographing each strip I documented its placement in the magazine, as well as its use of panels and visual style. The works showed an impressive range in styles and methods, from painterly brushwork to precise line work, as well as a range in formal approaches to the page, from highly structured framed grids to organically placed images across the page.

The MLC Research Centre’s goals include advancing the field of Comics Studies by researching the dynamics of narrative and storytelling, in particular in silent comics. While my research explores matters of audience to some extent, my new study—a chapter on 19th century wordless comics for an edited collection on the works of Anthony Trollope—explores the formal aspects of the comics and what and how they communicate. This new study examines the comics I studied in the center, as well as collections of reprints of comics from the same period that I was able to acquire for my collection at the Cité’s specialized bookstore.

One day at Documentation Center, Thierry Groensteen, a leading French comics theorist and the author of The System of Comics, dropped by. Groensteen has written extensively about silent French comics and their history, and it was a privilege to meet him and sit down and discuss my research project with him and learn about his current work.

Another highlight was the annual Festival internationale de la bande dessinée. The festival takes over the entire city center of Angoulême, with multiple tents filling streets and squares to house the stands of comics publishers and creators. As I had hoped, I was able to meet up with a number of contemporary creators of wordless comics, notably some upcoming Dutch cartoonists such as Marcel Ruijters, Jeroen Funke, and Sam Peeters. Both Peeters and Funke gave me their most recent works of silent comics, and I look forward to following up with them, and expanding my research network of comics artists and theorists. It was fascinating to learn more about the specific challenges these artists encountered in creating silent comics, as opposed to the traditional visual-verbal blend of comics.

This archival trip would not have been complete without a visit to the exhibitions that were showing all over the city, including two that commemorated the first World War, "Tardi et la grande guerre” and "Gus Bofa, l’adieu aux armes,” both held in the Musée de la bande dessinée, across the river from the Cité.

It was nothing less than inspiring to see the rich cultural history of the comics in France, and to see the passion and interest with which the form is embraced by so many people.

Research travels to France were made possible through generous support by the SSHRC Postdoctoral Fellowship program, and the MLC Research Centre.