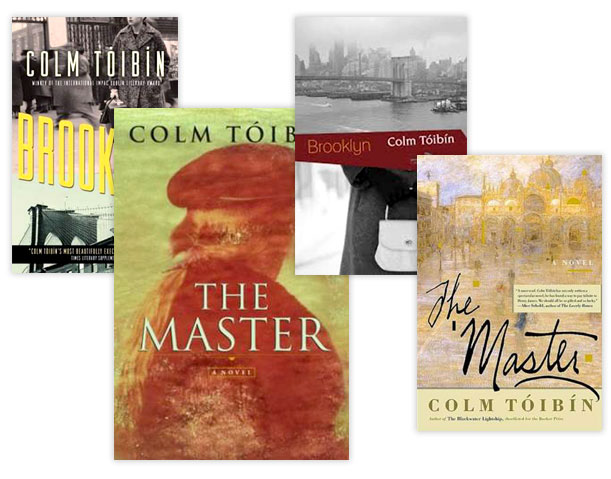 Sitting in the back of the large tiered lecture hall that is filling up with students, I suddenly see him standing at the doorway, the sculpted face with red glasses framed by the door like a portrait. Colm Tóibín, shortlisted in 2004 for the Man Booker Prize for The Master, a novel about the late Henry James, an enormously difficult subject that dazzled with subtle intelligence, is making his entrance. With Starbucks cup in hand, he takes a seat at the front, a bare table, in front of an equally bare whiteboard.

The topic of class is Tóibín’s 2009 novel Brooklyn, which is about to be made into a movie. Set in the 1950s, the book traces the development of Eilis Lacey, a young Irish woman who immigrates to Brooklyn, where she takes a job in a department store and eventually falls in love with Tony.

Tóibín, who is also a literary critic, relishes subtlety and nuance. He talks about the "shadows of other books” that affect his characters. His character Eilis recalls Jane Austen’s Fanny Price, who "gets pushed around” in Mansfield Park, as Tóibín explains: "You enter [Fanny] and you begin to feel as she feels.” Although both female characters lack strong wills and forceful personalities, they come out intact, with a quiet assertiveness.

The emotional sparks that prompted the novel are surprising, as Tóibín credits his visiting professorship at the University of Texas Austin, where he taught literature and creative writing in 2006. In Texas amongst people who "laughed all the time,” he found himself missing the things that one "normally doesn’t like about Ireland,” such as "the Irish bread and the Irish rain.” He began the novel after this stint in Texan exile.

Still more surprising is the provenance of the novel’s title, Brooklyn, taken from the snippets of gossip overheard in childhood at his own home. Tóibín was twelve years old when mourners gathered at his home after his father, a teacher, had passed away. It was at this occasion that Tóibín heard the gossip about an Irish woman who had gone to "Brooklyn.” Brooklyn stuck in his head, along with memory of "the older generation,” notably his mother’s two sisters, both born during the 1920s, who provided the backstory.

Another inspiration was an oral history of Brooklyn in which Tóibín read that every "Italian male [in Brooklyn] wanted to marry an Irish girl.” The allure of a Catholic wedding was trumped only by the couple’s dream of becoming American.

Tóibín, who resides in Dublin, talks about writing as an almost bodily experience that begins with rhythm. The opening sentence, he intones, comes like a gift when you expect it least. The other part of the magic is discipline. You write, and when the going gets tough, you keep writing. Tóibín’s rhythm is to write three hours in the morning each day.

"Get the thing down,” he instructs. "Don’t worry about craft.” Instead, "track your daily word count on your wall.” And for good measure he supplies this aphorism: "Writing is the struggle against your own laziness.”

Down to earth and unassuming, he deftly maneuvers and charms the class, his sly wit and irony on display. For those who mistake his understated directness for folksiness, the red glasses dangling around his neck should be a warning. "You mean you googled me,” he retorts when a confident journalism student begins his question by informing Tóibín: "I researched you.”

By the end, as the hundred or so students in attendance line up with books in hand, and Tóibín sits down to sign them, one is left with a sense of shared connection. A spark between the writer and his audience. "The less you think about yourself the better; you have to become invisible,” the master advises this class of future writers, English and Journalism students at Ryerson. "The page is blank; it is not a mirror.”

The event was organized by Dr. Laura Fisher, assistant professor of English and MLC Research Associate.