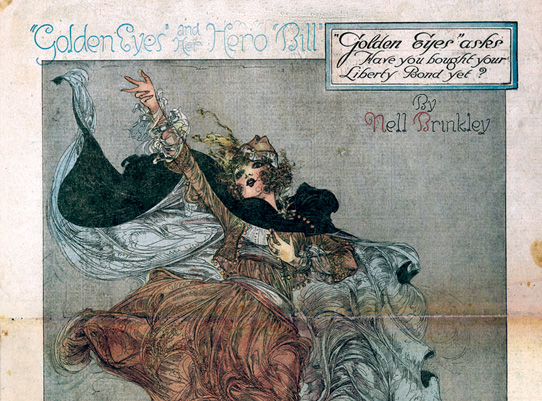 "'Golden Eyes' asks Have you bought your Liberty Bonds yet?" "Golden Eyes" was one of the celebrated "Brinkley Girls," who showed up as an American home front heroine during World War I. Drawn by cartoonist Nell Brinkley, "Golden Eyes" sold Liberty Bonds and encouraged Americans to support the war effort. As one of Brinkley's stylish and popular female characters, "Golden Eyes" stood for patriotism and suffrage and wanted to do "her bit."

Nell Brinkley (1886-1944), the creator of the Brinkley Girl, was nationally syndicated for the Hearst newspapers, and published her cartoons in New York's popular periodicals such as Cosmopolitan and Harper's Magazine. Throughout her long career, which started when Brinkley was a teenager and spanned four decades to the 1940s, the illustrator shrewdly used her work to encode political messages, sympathizing with working women and making a series about First Lady Eleanor Roosevelt.
On Thursday May 8, 6-8 pm, American comics writer, artist and historian Trina Robbins, the author of a new book, Pretty in Ink: North American Women Cartoonists 1896-2013, will give a public talk on the subject of the Brinkley Girls and war time patriotism at Ryerson University.

Refreshments will be served. Books are available for purchase and will be signed by the author. This event is free of charge and open to the general public. All welcome.
To RSVP, please contact: admin@mlc.ryerson.ca | 416-979-5000 ext. 7668
For more information: Dr. Barbara Postema, Postdoctoral Fellow, MLCRC

Biography:
Trina Robbins is a prolific author with a focus on women and feminist themes in comics. She is the author of The Great Women Superheroes: From Girls to Grrrlz, The Great Women Cartoonists, and Nell Brinkley and the New Woman in the Early 20th Century. She has also written a comic that throws a light on Lily Renée, Escape Artist, a biography in comics form about a holocaust survivor who went on to become a Golden Age comic book artist.
The Toronto Comic Arts Festival 2014 will take place Saturday, May 10, 9am-5pm, and Sunday May 11th, 11am-5pm, at Toronto Reference Library, 789 Yonge Street. 18,000 visitors are expected. The Toronto Comic Arts Festival exists to promote the breadth and diversity of comics, and what is considered comics, as legitimate medium of literary and artistic worth.
Robbins' talk is co-hosted by the Canadian Society for the Study of Comics and the Modern Literature and Culture Research Centre, Ryerson University.
See photos from the event in our gallery: 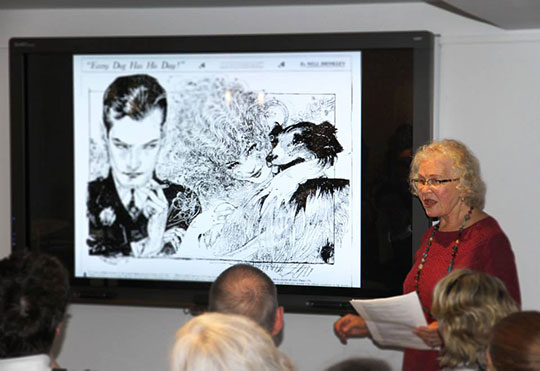