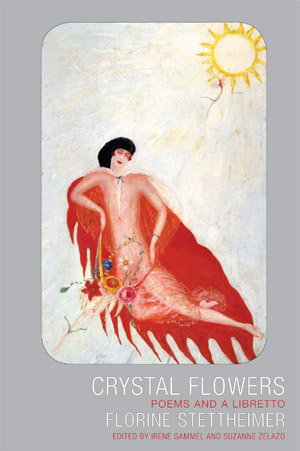 Crystal Flowers, Poems and a Libretto

Florine Stettheimer (1871-1944) was an American modernist of German-Jewish heritage living in New York. She was a painter, designer, and poet. Together with her sisters Ettie and Carrie, Stettheimer hosted a legendary salon on the Upper West Side, where they entertained the likes of Marcel Duchamp, Carl Van Vechten, Henri McBride, and Georgia O'Keeffe. In 1934 Stettheimer designed the set and costumes for Gertrude Stein's opera Four Saints in Three Acts to much acclaim. In 1949, Ettie collected Florine's poems in Crystal Flowers, a privately printed, elegant edition of 250. In addition to these rare poems, this new volume offers formerly unpublished material culled from archives, including three new poems and Stettheimer's libretto for her ballet "Orphée of the Quat-z-arts.' Gammel and Zelazo have re-situated this overlooked poet among her modernist sisters, presenting her as an important practitioner of a modernism that integrates multiple art forms. Sixty years after it first appeared for a select few, her poetry shines for a new generation of readers ready to appreciate her irreverent camp aesthetic and her exuberant painterly style.

Irene Gammel is a literary historian, biographer, and curator. She holds the Canada Research Chair in Modern Literature and Culture at Ryerson University in Toronto. She is the author of numerous books including Baroness Elsa, a biography of New York Dada artist and poet Elsa von Freytag-Loringhoven, and Looking for Anne, revealing the hidden life of Canadian author L.M. Montgomery during the writing of her classic novel Anne of Green Gables.

Suzanne Zelazo is a poet and postdoctoral fellow at the Modern Literature and Culture Research Centre, Ryerson University, where she researches avant-garde women's poetics and performance. She is the author of Parlance, a volume of poetry channeling, among others, Leonard Cohen and Virginia Woolf.

The Book is published by BookThug
View Book here

I have loved Florine's poetry for years and always hoped that someone would re-publish it. Your book is beautiful and extremely well-researched and presented. Thank you for your kind acknowledgment and the beautiful book.
— Barbara J. Bloemink, author of The Life and Art of Florine Stettheimer

I'm really so happy to have [this new edition of Florine Stettheimer’s Crystal Flowers. Just from glancing through it [I noticed] a couple of coincidences. I did know Charles Henri Ford and we just had dinner last week with Doris Bry, who was the agent for Georgia O'Keeffe and mentions how O'Keeffe was such a friend of Florine Stettheimers. Many, many thanks and long live BookThug!
— Mark Kelman, Dada art collector, New York

I have long had an interest in Florine Stettheimer’s Crystal Flowers, having acquired a copy of the original many years ago (and quoted from it in my New York Dada). This new edition of Crystal Flowers is really a nice publication...
— Francis M. Naumann, author of New York Dada

This is simply a fan letter about Crystal Flowers by Florine Stettheimer. It is not only wonderful to have it in print, but to see it done with elegance and seriousness.
— Steven Watson, author of Strange Bedfellows: The First American Avant-Garde

These deceptively simple poems—sometimes reminiscent of nursery rhymes—are often tinged with Stettheimer’s signature sardonic humour and her sense of the gendered complexities and imbalances of her time. There is something reminiscent also of Japanese poetry traditions in her ability to limn vivid images within succinct verses and to subvert the set-up emotional reaction with a hairpin turn.
— Camille Martin, author of Sonnets

The prettiest-looking of the three books is Crystal Flowers: Poems and a Libretto…, by Florine Stettheimer, also edited, though for a different press, by Ms. Gammel and Ms. Zelazo. Stettheimer (1871-1944) was, like the baroness, a notable art world eccentric, though of a different kind: elusive, deeply private and withholding of her work. Her paintings of fantastically imagined avant-garde soirees have become American modernist staples since her death. Her poetry has been little seen and, published in this neat little book, with Stettheimer floating across the cover, it's a delight: whimsical but with surprisingly frequent and well-placed bites.
— Holland Cotter, New York Times