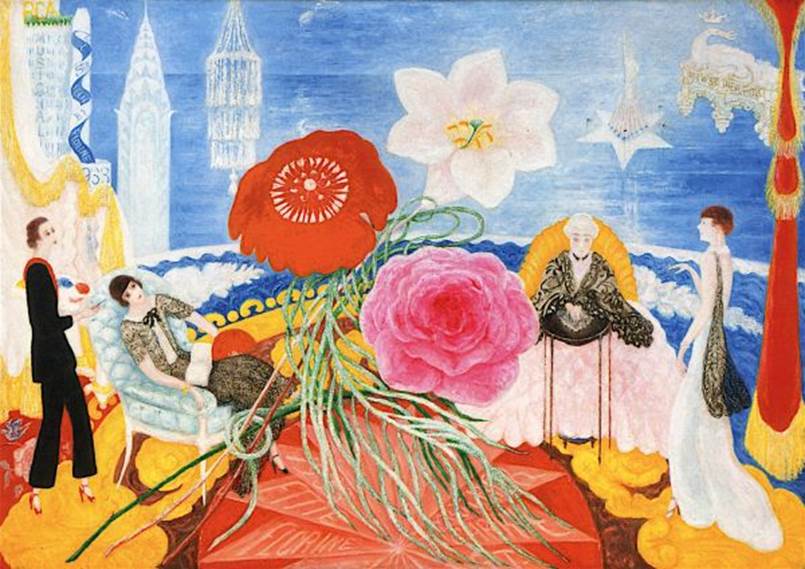 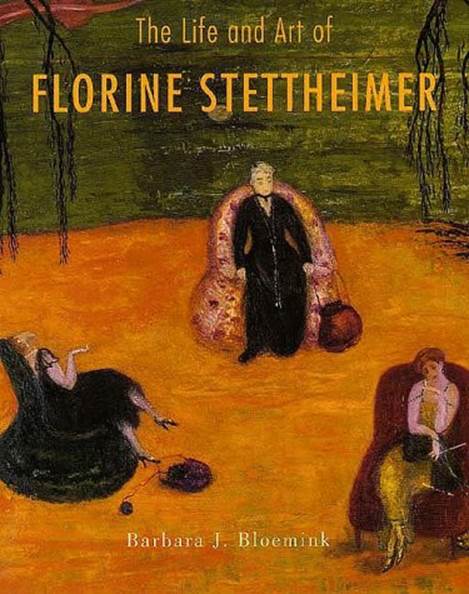 Join us as we explore the multimodality of the work of Jazz-era New York saloniere, painter, and poet Florine Stettheimer, as well as the work of her sisters, Carrie and Ettie. We consider the paintings, the poetry, and the salon through a diversity of theories and approaches including feminism, postcolonialism, and fashion. The MLC Gallery display is curated to evoke the Stettheimer’s famed ambience. Participants include scholar Barbara Bloemink, curator Georgiana Uhlyarik, and visual artist and poet Steve Venright. This event centrally involves the work of graduate students as part of the course CC8992: Florine Stettheimer’s New York Salon. and is presented on the occasion of the AGO exhibition Florine Stettheimer: Painting Poetry.

In this opening presentation, acclaimed biographer and author of The Life and Art of Florine Stettheimer (Yale University Press) presents her new thesis on Stettheimer, who proved to be an unusually confident feminist artist (the painter of the first known openly feminist fully naked self-portrait by a woman in western art history), a strong, innovative, artist who, in her paintings, sometimes tackled controversial issues of identity politics. Stettheimer created a uniquely feminine style (as a contrast to her contemporaries' abstract modernist and masculine regionalist styles) in order to document the new modern excitement, sensations, and sites of New York City and its upper class follies, with a sharp, critically realistic eye brushed with a cutting sense of humour.

Argues that the Stettheimer brand has evolved posthumously, shaped by her sisters, artists, curators, academics, and students. This presentation uses branding theory by Victoria L. Rodner and Finola Kerrigan, exploring also the association of Stettheimer with “Jewish Rococo.”

Explores Florine Stettheimer’s work as a depiction of her salons, social events, and habitués. The presentation uses narrative theory by Mieke Bal and others to analyze Stettheimer’s visual art. Applying Lothar Hönnighausen’s concept of Konversationsstücke, it considers the social and scenic aspects of Stettheimer’s art as part of her modernist aesthetic.

Analyzes Marcel Duchamp’s correspondence with the sisters from 1917 to 1946, by focusing, firstly, on the medium of the letter itself; secondly, on Henri Bergson's concept of la durée or duration; and by extension, Gilles Deleuze's concept of multiplicity to explore the ludic and relational quality of Duchamp’s self-construction in his epistolary relationship with the sisters.

Although Florine Stettheimer’s paintings have been usefully considered in terms of camp, diaphanous, and rococo aesthetic enterprises, this paper suggests another context in which to understand her poetic methods: the “stripped down” minimalism practiced by Emily Dickinson and William Carlos Williams. As American minimalists, they rejected the rarified complexity of articulation and intertextual gesture preferred by Ralph Waldo Emerson, James Joyce, Ezra Pound, and T. S. Eliot (who famously intoned that modernist poetry must be “difficult”),  and instead shared with Gertrude Stein, H.D., and Langston Hughes the need to develop a poetics of strategic simplicity. As Stettheimer’s speaker observes of her flowers in “[All Morning],” “I strip them of their green/ They look more brilliant—/ become more effective[.]”

Argues that Florine Stettheimer included Dada elements in her poetry, including a sense of the ridiculous, a disrespect of authority and tradition, and a prioritizing of play over explicit meaning. Using theories of Dada, the presentation reveals these elements to be especially effective in her animal poetry.

Using theories of embodied cognition, and drawing on her own experience as a former dancer, modernist scholar Melba Cuddy-Keane explores Stettheimer’s “Wave” as a case study. The costume designs of Orphée of the Quat-z-arts have remained under-researched; this presentation contributes to our understanding of the ballet and of Stettheimer’s embodied aesthetic.

Like Florine Stettheimer, Steve Venright is a multidisciplinary artist who channels his creative expression through multiple media, and like Stettheimer employs an absurdist humour to disarm, connect with, and astonish his readers. Venright is known for his explorations into, and representations of, the phenomenology of the mind. He will perform Stettheimer’s poetry and then recite his own poetry from his new book, The Least You Can Do Is Be Magnificent: Selected and New Writings 1983-2016 (Anvil Press).

Jean-François Lyotard writes that “for the eye ‘to recognize sound,’ as Paul Claudel put it, the visible must be legible, audible, intelligible.”  Starting from the Portrait of Alfred Stieglitz painted by Florine Stettheimer in 1928, Dorenbaum addresses the relationship between the image and the poem—discourse and figure—in Stettheimer’s work. Why was Stettheimer so reluctant to display and to sell her paintings? Why, despite her strong links with photographers such as Paul Strand, the Baron Adolph de Meyer, and Alfred Stieglitz himself, was she never photographed by any of them? The enigma, Dorenbaum suggests, resides at the point of confluence, in the intermediary area between her paintings and her poems.

“[Stettheimer’s] respectful empathy and singular ability to image what is… ‘not the self’ can be inferred by the manner in which she portrayed black figures in her paintings.” Using Barbara Bloemink’s helpful argument and analysis of Asbury Park South as its point of departure, this presentation performs a post-colonial reading of the painting, posing questions about objectifying “the Other.”

Cellophane was the new synthetic material in the early 1900s that marked the new style. Using Judith Brown’s work on cellophane and modernism, and Gammel and Zelazo’s “Wrapped in Cellophane: Florine Stettheimer's Visual Poetics” as a springboard, while also referencing Stettheimer’s poetry and her set design for Four Saints in Three Acts, this presentation focuses, first, on cellophane’s transparency and glamour; and second, on cellophane as a metaphor for the plasticity of modernity.

By drawing on feminist theories, this presentation explores the artistic labor involved in Carrie Stettheimer’s dollhouse. The presentation also considers the trajectory from Carrie’s dollhouse through Ibsen’s A Doll’s House to more recent feminist dollhouse projects such as the Womanhouse (1971-72).

The artistic staging of the symposium including the vitrines and the book cases takes inspiration from the Stettheimer sisters’ aesthetic in art and décor. Music provided by Kate Marland.

Whimsical glass dragonflies are meant to be reminiscent of Florine Stettheimer’s portraits that call to mind insect wings and antennae, reflecting the gender-fluid poses of the figures.

Uses the webhosting/website making community Neocities to make a guestbook for the salon. Neocities allows us to make Web 1.0 style websites that have a unique visual flair.

Join us for a Twitter discussion on the work and achievements related to the Stettheimer salon. All welcomed. For more information, and to participate, please contact warsan.amin@ryerson.ca, holly.lock@mlc.ryerson.ca, or Lexie_Buchanan@ago.net. 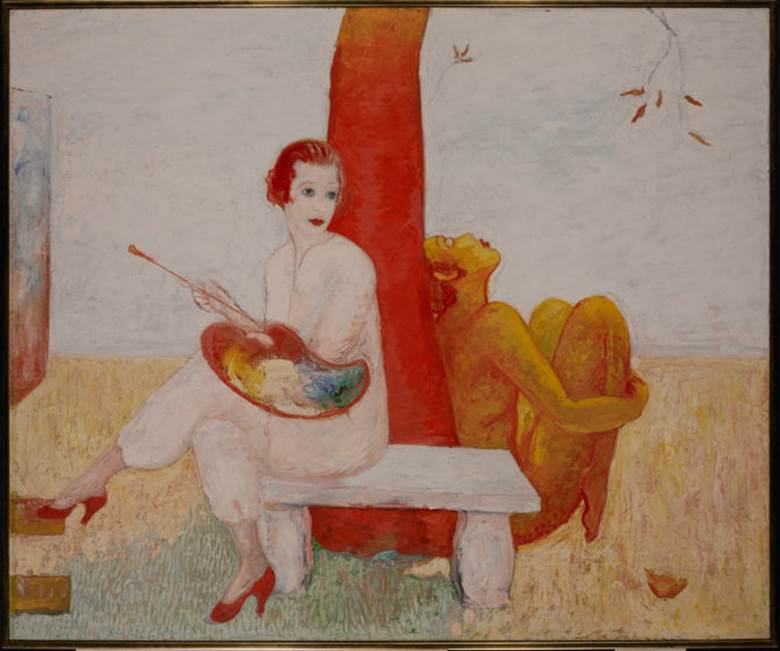 A Soirée Of Performance – The Art Gallery Of Ontario

Join us for a Soirée of Stettheimer-inspired performances, which take place at the Art Gallery of Ontario. Our programming will be situated in the central area of the exhibition space, to allow uninterrupted viewing of the exhibition for visitors. This event centrally involves the work of graduate students as part of the course CC8992: Florine Stettheimer’s New York Salon.

This brief presentation tour explains how Stettheimer simultaneously consumed and ignored the conventions of early twentieth century art, how she inverts Rococo painting style and bodies in works such as Spring Sale at Bendel’s (1923), and considers the recent reclamation of Stettheimer as a symbolist. 2 min for each painting.

Florine Stettheimer’s ballet Orphée of the Quat-z-arts (1912) has remained unfinished; without a musical score, it was never performed. The music, newly composed taking Debussy’s Prelude as inspiration, provides the impetus for this performance with audience interaction.

Using Ettie Stettheimer’s roman à clef Love Days, this creative project involves the performance of a scripted dialogue focused on Marcel Duchamp’s visit to the Stettheimers sometime during the early 1920s. The dialogue reveals the complex relationship between Ettie and Duchamp, as perceived by Ettie herself, who casts Duchamp as Pierre Delaire (Stone of Air) and herself as Susanna Moore.

This project involves the recitation of a series of four ekphrastic poems — poetry based on or inspired by another piece of art. Taking inspiration from Stettheimer’s creative multimodality, the poems address works on display at the Art Gallery of Ontario: the maquette Euridice and Her Snake, the paintings Beauty Contest: To the Memory of P.T. Barnum, Family Portrait II, and the set design for Four Saints in Three Acts.

Taking inspiration from Duchamp’s point on the mobility of Stettheimer’s art and Bloemink’s note on Stettheimer’s enjoyment of film and photography, this project focuses on poems that capture Metropolitan New York City. It transposes these poems into the city of Toronto by juxtaposing photographs of the Toronto skyline with enactments of the poems.

Soirée at the AGO photo gallery

For help with the organization of this event we thank Suzanne Zelazo. For help with logistics, Lucy Wowk. We also owe thanks to Cameron MacDonald, Esther Berry, Anna Krentz, Alex Chronopoulos, Sabrina Sgandurra, and Jason Wang. We thank the Art Gallery of Ontario and specifically curator Georgiana Uhlyarik and programmer Kathleen McLean for their support with this project; Warsan Amin, Holly Lock, and AGO’s Lexie Buchanan for Social Media support; for website support Michelle Walden, Propeller Ideas Inc.