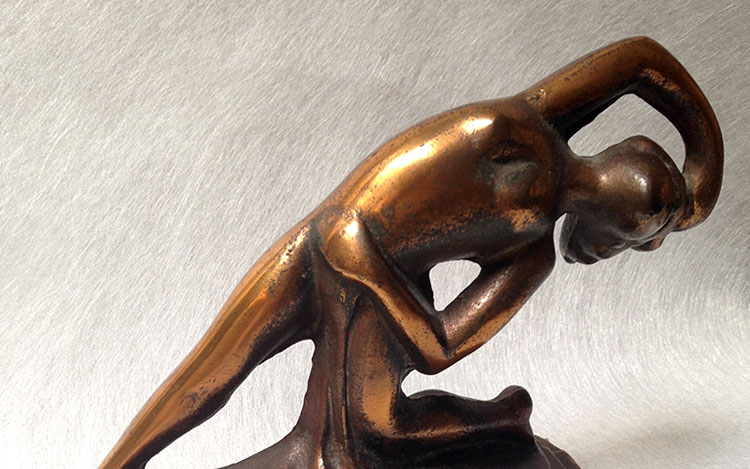 Though decorative bookends were once overlooked by the art world, in recent years the rising appreciation for popular art has provoked new assessments of their worth, by scholars, collectors, and connoisseurs. Their very status as objects of popular art provides insights into the interactions between mass and elite culture. Nowhere is this relationship more apparent than in the early twentieth century, when modernism was expressed not only in the galleries and salons of Europe, but across wide ranges of consumer objects made in the Art Deco style. This can be seen eloquently and beautifully in a recent donation to the Modern Literature and Culture Research Centre of thirty bookends and two other decorative brass items from the 1920s-30s. The objects are a gift from Dr. Karen Mulhallen, the long-time editor of Descant and an MLC Research Associate.

The collection offers a compelling glimpse into the material culture of the period. Despite the date of their creation, several of the pairs would not look out of place in an Edwardian library, such as a pair of horses standing sedately by fences. Most, however, express the motifs and styles of Art Deco. A pair of cat bookends take on Art Deco elongation and geometric features, echoing the Egyptian look so popular in the 1920s. Brass elephants stand before mounts that have been nickel-plated for the same kind of mirrored effect embraced in contemporaneous furniture.

Perhaps the most representative of the period is a bookend depicting a female dancer, mostly nude, her body dramatically arced. She is the liberated “new woman” so embraced by Art Deco artists and artisans, down to her bobbed hair and boyish figure. Her body is sleek, the metal gleaming, evocative in its expression of movement. The emblematic nature of this figure is expressed, also, by her abundance; the collection includes five pairs of this dancer. This particular interest, shared by the original consumers of the objects as well as their later collector, expresses the iconographical status of the figure.

The dancer bookends were made by Armor Bronze, an American company specializing in the creation and sale of decorative metal objects, from bookends to figurines to lamps. Several other of the bookends, as well as a geometric desk tray with a stylized panther, were created by Frankenart Inc., a similar company. Business such as these, selling primarily to middle-class families via catalogue, were not, perhaps, on the cutting edge of modern or even decorative art. At the same time, they were a principal avenue for the wide dissemination of trends arising from the avant-garde. Objects such as these bookends allowed members of the general public to engage with modern ideas of design and style. As such, they are valuable—and lovely—objects of art and history.

Scholars of art, fashion, and culture will greatly benefit from this donation to the MLC. To donate original materials from the modernist era (1880 - 1940), or to conduct a research project on our holdings, please contact the MLC at archive@mlc.ryerson.ca.