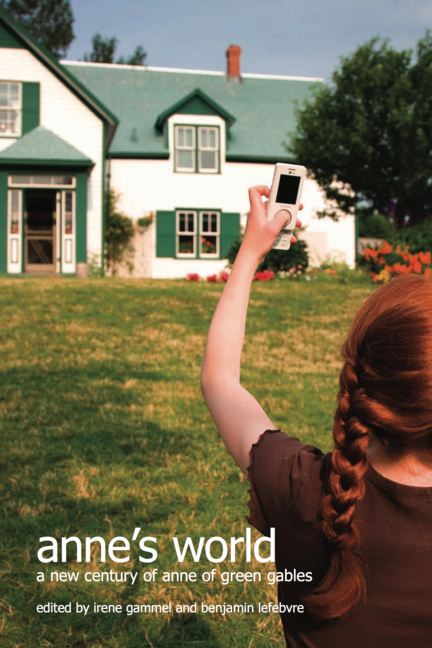 Anne’s World: A New Century of Anne of Green Gables

The recent 100 year anniversary of the first publication of L.M. Montgomery’s Anne of Green Gables has inspired renewed interest in one of Canada’s most beloved fictional icons. The international appeal of the red-haired orphan has not diminished over the past century, and the cultural meanings of her story continue to grow and change. The original essays in Anne’s World offer fresh and timely approaches to issues of culture, identity, health, and globalization as they apply to Montgomery’s famous character and to today’s readers.

In conversation with each other and with the work of previous experts, the contributors to Anne’s World discuss topics as diverse as Anne in fashion, the global industry surrounding Anne, how the novel can be used as a tool to counteract depression, and the possibility that Anne suffers from Fetal Alcohol Syndrome. Anne in translation and its adaptation for film and television are also considered. By establishing new ways to examine one of popular culture’s most beloved characters, the essays of Anne’s World demonstrate the timeless and ongoing appeal of L.M. Montgomery’s writing.

Irene Gammel is a professor and Canada Research Chair in Modern Literature and Culture in the Department of English at Ryerson University.

4. "Too Heedless and Impulsive”: Re-reading Anne of Green Gables through a Clinical Approach / Helen Hoy (65–81)

8. On the Road from Bright River: Shifting Social Space in Anne of Green Gables / Alexander MacLeod (134–49)

"This collection is really ‘Anne for a New Century.’ As Anne begins her journey into the next millennium, after her first 100 years, Gammel and Lefebvre have proven that there are startling new facets to uncover: her disabilities and her creator’s depression; her modern fashions and her ruthless tourism; her long archival life in libraries and her postmodern digital presence. These new approaches reveal that Anne is as new today as ever.”
— Holly Blackford, Rutgers University, editor of 100 Years of Anne with an "e”: The Centennial Study of Anne of Green Gable

"[M]any of [the essays] will intrigue and entertain both experienced and emerging scholars, and they certainly will inspire twenty-first-century continuations of the study of all things Montgomery.”
— Children’s Literature (Johns Hopkins University Press) Read more

"The careful curatorial work of editors Irene Gammel and Benjamin Lefebvre provides intellectual coherence to the book’s diverse approaches...as ‘Anne’s world’ begins its second century it remains a powerful tool for reading and understanding the realities of our world.”
— Canadian Literature Read more

"Anne’s World … extends old and blazes new paths, backwards and forward from 1908, inward and outward from Cavendish. The essays [provide] twenty-first-century readers of Anne of Green Gables—or indeed anyone interested in how classic texts might be read in the twenty-first century—with the opportunity to reflect and respond and renew their acquaintance with Anne and her world.”
— ESC: English Studies in Canada Read more

"By establishing new ways to examine one of popular culture’s most beloved characters, the essays of Anne’s World demonstrate the timeless and ongoing appeal of L.M. Montgomery’s writing.”
— CANTEXT: The Newsletter of the BACS Literature Group (British Association for Canadian Studies)

Alexander MacLeod, author of the chapter "On the Road to Bright River: Shifting Social Space in Anne of Green Gables,” was short-listed for the prestigious Giller Prize in October 2010.